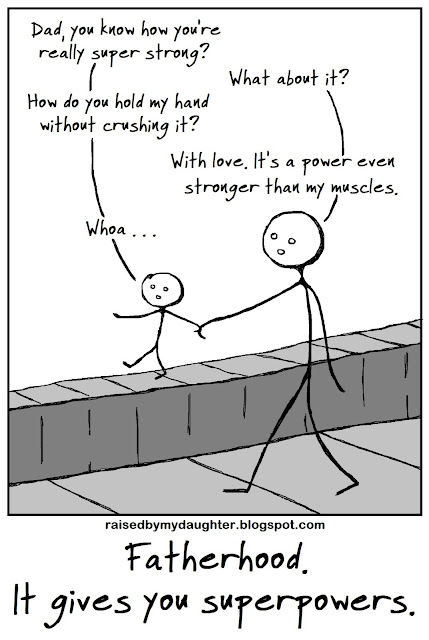 My daughter thinks I’m a real strong-man. She’ll saunter up, jab her finger at me, and shout, “Show me your muscles!” I squat down, roll up my sleeve, and let her feel my bicep. “Wow,” she exclaims. “Nice muscle.” Said to the guy who hasn’t weighed more than 130 pounds in years. Then she holds up her arm, and I poke and measure her bicep. “Wow,” I tell her, “That’s a pretty good muscle too.”

Sometimes she’ll pick something heavy up, squeeze it tight to her belly, and carry it over to me, grunting all the way. She’ll drop it in front of me, and wait for an impressed exclamation. In time, she’ll learn that the size of her bicep is less important than stretching to do hard things. I want my daughter to feel confident that most obstacles in life are surmountable with the right attitude and a lot of hard work.

At the same time, I want to communicate to her that part of becoming strong is both supporting and relying on the people you love. Like trees with intertwining roots, we can be stronger as a group than we can on our own. It’s a concept I sometimes struggle with myself, being an extreme introvert (lovingly, my wife sometimes calls me Boo Radley). But it’s the reason I got married. And I see its importance even more now that I have a little girl. Which brings me back to the concept of holding hands — another analogy that projects big in my mind.

When Addison was younger, I’d need to proactively steer her away from streets, from electrical outlets, from delicate display cases in stores. She’s grown a year wiser, a year more circumspect; also, a year more adventurous. She knows not to dash into the road; she understands that things are breakable; she knows that some things are off limits. She is maturing from a wide-eyed foal, transfixed by shiny baubles and new sensations, into an eager colt, a daring explorer. The transition isn’t necessarily one of lessened danger, but one of maturing, deliberate intentions. Where before she had little sense of her own fragility, at almost three and a half years old she’s truly in the midst of judging risks and making calculated decisions. She’s getting bigger, stronger. Literally and metaphorically, she’s flexing and growing her muscles.

We haven’t stopped holding hands. I still instinctively reach out to her, and she still (when she feels like it) reaches back. What’s really changed is that I used to be the captain of our ship, choosing a direction with a crew that was sometimes amenable and sometimes insubordinate. But now as often as not, she is the charismatic visionary at our helm.

“Daddy, come on,” she’ll say, hauling at my hand, seeking to move her big lump of a dad, no matter whether our break has been five minutes or five seconds. “I have something to show you.” It touches me that even though she sometimes wrests leadership away from me, she hasn’t kicked me off the boat. She’s not just sailing off on her own. She wants to explore, but she still wants a partner. Or perhaps a first mate. She wants to burst upon that frontier but she wants to do it with a companion at her side. I love the way she tugs at me now, urging me on in the same way that I used to urge her on. She threatens, she cajoles, like a tiny parent.

“I will LIFT you up. Like this. Ungh! I am PULLING you up! Ungh! You need to LISTEN to me! We are GOING! We are still ‘SPLORING!”

It’s a fun new phase, this moment where she is excited to explore, and equally excited to share. It’s fun to be hand-in-hand with her. And the significance of hand-holding isn’t lost on her. Right now her go-to form for a figure, whether drawing humans, monsters, or aliens, is to draw their arms extended, so that she can stretch each limb out to touch the next. It’s a worldview I can get behind.

I write. I paint. I draw comics. I raise a handful of a little girl, and I try to treat my wife right.