THIS BLOG CONTAINS SPOILERS SO SEE THE LEGO MOVIE ALREADY! 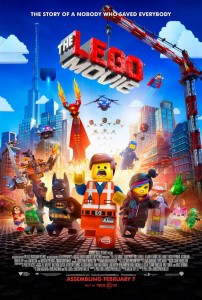 I wasn’t prepared. Not at all. I didn’t expect to feel like The LEGO Movie spoke to me directly while offering biting social satire to tickle my media studies background. I sure wasn’t prepared for that incredibly emotional twist at the end that made my childhood flash a bit before my eyes. No. When I first read that Hollywood planned to make a movie about LEGOs, I figured it’d be a hackneyed product placement flick for the kiddies, not a film designed for all ages and filled with brilliance, wit and deeply poignant moments.

The LEGO Movie had me within its first ten minutes. It tells the story of Emmet (Chris Pratt), an average construction worker who, like almost everyone else in his LEGO world, unquestioningly follows the rules, consumes reality TV programs, buys ridiculously overpriced coffee, loves chain restaurants and literally sings along for hours to a tune called “Everything Is Awesome,” all of which have been established by President Business (Will Ferrell) as a means to keep people in line and turn them into mindless robots. Emmet, in other words, is the everyday American consumer (a beautiful irony considering we’re watching a movie dealing with some of the world’s most popular and heavily consumed toys).

But suddenly Emmet stumbles upon Wild Style (Elizabeth Banks) and her counter-culture friends (a great nod to The Matrix) who are out searching for “The Special,” the one who will defeat President Business (who in a nod to the Star Wars prequels, is the diabolical LORD Business when not in front of the camera) and allow imagination and creativity to reign once more. Essentially, in addition lampooning American consumer culture, LEGO satirizes itself and how the toys morphed from a pail, bag or box of simple interlocking plastic bricks with which kids were meant to use their inventiveness into giant and expensive sets with point-by-point instructions often purchased and preserved by adults. Lord Business’ evil plan, in fact, is to use a secret weapon to eternally freeze the world using his vision of perfection.

Led by Vitruvius (Morgan Freeman), the rebels, consisting of “master builders” from Batman (a hilarious Will Arnett) to Unikitty (Alison Brie), make innovative use of their beautifully animated LEGO surroundings to fight off Lord Business’ second-in-command, Bad Cop (Liam Neeson), and his robots including “micromanagers” to eventually lead Emmet, “The Special,” to his destiny.

And that’s when things get really wild.

Suddenly The LEGO Movie jumps from animation to live-action where we learn a young boy has imagined everything we’ve seen up to date and Lord Business represents his father (Will Ferrell again), a man dressed in a starched white shirt and tie, who has devoted his basement to building a colossal LEGO city using step-by-step directions and wants to preserve it for all-time using Krazy Glue. It’s here where the The LEGO Movie becomes an emotional father/son tale as we learn that the dad (aka “The Man Upstairs” in Emmet’s world) has gone to great lengths to quash his son’s imagination and desires to just build cool and crazy LEGO things; signs that read “Do Not Touch” abound throughout the room, and the father asks his son how many times does he have to tell him not to play with his “stuff” (a word often spouted throughout the film by President/Lord Business).

As I watched the hurt in the young boy’s eyes, I remembered my own childhood. I was never very into LEGOs and my dad did try to get me into things he liked (such as model trains), but my father never understood me as a kid, never connected or urged on the creative blood that once flowed through my veins before I became too frightened and anxious to act on them and they all but disappeared. This major disconnect between my dad and I helped, along with many other things, lead to my clinical depression. Even today, after two nervous breakdowns, dozens of panic attacks, family therapy, and his own voice telling me he’s proud of me and that I should do whatever I want to do in life, pleasing him remains at the forefront of my brain.

I’ve written before about how much I associate my father with work (for the longest time I could not picture him without a suit and tie) and how that’s played a role in my warped view of success as being solely money- and job status-oriented. I hated ties as a kid (still do) and began to think of them as nooses designed to keep workers in place. In the film, Lord Business’ outfit even looks exactly like a tie! Total stroke of genius!

So when I saw this poor young boy whose dad was the epitome of work, perfection and practicality, I got a hitch in my throat, and the name “Lord Business” took on a whole new meaning. It was MY dad and I was the boy. But soon the father, through a bit of LEGO magic and personal reflection, learns the error of his ways and he and his son begin to bond over their creations, a union my father and I never had when I was a child. In the end, while The LEGO Movie is a gorgeously animated, wry and subversive take on our consumer society, it’s really about good parenting and a father and son, though I should say that the father tells the boy that his sister will be allowed to play as well (a nod, along with Unikitty and her bright and colorful wold, at how LEGO is attempting to appeal to young girls as well as boys).

But the third act father/son shocker wasn’t the only thing that got me emotionally, because early on in the film I whipped out my phone and wrote down this piece of dialogue spoken by Vetruvius to Emmet:

“Don’t worry about what the others are doing. You must embrace what’s special about you.”

This might as well have been spoken to me by my therapist, family, friends and fellow dad bloggers as I’ve fallen repeatedly into the depressive pit of comparing myself to everyone else. Despite my scary, insanely well-accepted and ultimately rewarding reading at Dad 2.0 just a few weeks ago, I’ve become more and more worried about my own writing and blog and keep comparing myself to others.

And as I sit there with my chest hurting and tears in my eyes, writing to fellow dad bloggers and asking for help on how to become more like them, speaking to my therapist about how I’m not good enough, telling my best friends about these fears that seem to have quadrupled because now I feel people EXPECT me to live up to what I presented at Dad 2.0 while my brain’s telling me that that’s an impossibility, I hear or see them write the same thing Vetruvius said to Emmet:

“Don’t worry about what the others are doing. You must embrace what’s special about you.”

Between the father/son turn and that line of dialogue, I felt like The LEGO Movie spoke directly to me. Add on the fact that it impeccably satirizes consumer culture despite being a consumer product itself (essentially the question I explored when writing my master’s thesis about The Simpsons), and I can tell you that this is a special film wonderfully co-written and directed by Phil Lord and Christopher Miller, one I’d love to take Sienna to. It made me think and feel on so many levels, even about how I plan never to stifle Sienna’s creativity and ambition.

As the song attests, everything about The LEGO Movie is indeed awesome.

Lorne Jaffe is a stay-at-home dad residing Queens, NY with an amazing wife of 7 years and their beautiful 21-month-old daughter. He's been battling depression/anxiety disorder for most of his life. He has an MA in Media Studies and hopes to one day be a professional writer of memoir and/or pop culture analysis. You can follow his blog post at Raising Sienna