I started staying at home six years ago and was terrified. I lived in Chicago for 33 years without ever thinking I would move away. Everything and everyone I knew was in Illinois and I wasn’t so sure about moving to upstate New York in 2008. Away from family, friends, babysitters I knew and trusted, and away from a community I loved.I had to reset everything about my life. I had resigned after being a teacher in public schools for ten years and was giving all of that up to stay at home with our kids, who at the time were three and 21 months old. My first week was rough as my son broke his collarbone in a city where I was unfamiliar with where the hospital was and couldn’t get a hold of my wife or her parents who lived in the area for help. I felt a little lost. I questioned if I really could do this.Talk about trial by fire.A few weeks later, once I go the lay of the land, I sought out other dads who were like me. I kept seeing the same moms at the gym and at pickup for their kids. The Y Mommies accepted me as a parent but I still was looking for guys to share my experience with.It was in my church of all places where my wife and I met a couple who had kids of similar ages. What do you do for a living? they said to which I replied “I am a stay at home dad” Dreading the response he said “No kidding! So am I.” What resulted was a friendship between me, him, and his brother-in-law who was also a stay at home dad. We regularly met in Fridays which we donned Dads and Subs. One guy would bring the Wegmans sandwiches and the kids would have an instant playgroup while we got to talk to one another about our weeks.Of course, after feeling comfortable with making friends in my new city, my wife received an offer to relocate again in August of 2011, this time to Philadelphia and we couldn’t pass up the opportunity. This was the first city however where we knew no one and the first city that we couldn’t rely on family to bail us out of a jam with the kids.I looked around for dads groups when we got settled but was coming up empty. There were plenty of mom groups for stay at home moms of little ones, but nothing for dads. I even tried to join a mom’s group but was quickly rejected because “they didn’t feel comfortable with a man there”. I was on an island with really no where to turn until I found The National At Home Dad Network’s Convention page. 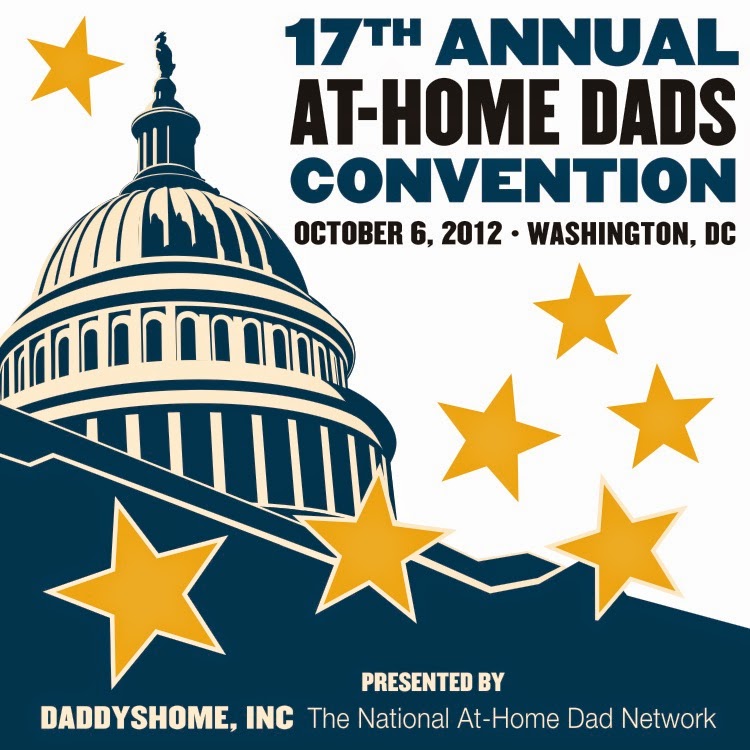 I will bet that you didn’t know that such a group existed. I have even had people laugh when I tell them this, like men aren’t interested in being around with other like-minded dads. I made plans to go the next year in Washington D.C. in 2012 and my wife worked out a schedule with my in laws to allow them to come while I was gone to watch the kids and help out. I piled into the car BY MYSELF and drove to D.C. I didn’t know what to expect. I wasn’t sure what to wear. Funny as that sounds, my wife had conditioned me to think of dress code for every event and I hoped that my superhero T-shirt and jeans were sufficient. Thank goodness I didn’t take the President’s Reception as serious as it sounded. FYI, what you wear with your kids on a day to day basis will fit right in.

It turns out that these guys were just like me. They were from all over, staying home with their kids because it was what was best for their family and trying to be the best dads they could be. We listened to speakers; people who had written books on parenting, a psychologist studying the rise of male caregivers in our society, and a website devoted to helping male military spouses who were at home.In break-out sessions, we had honest discussions without judgement. We could share and be heard while dads helped other dads. Panels discussed popular issues with other men just like me. Guys talked about isolation and everything from discipline to diapers and bottles to breastfeeding. It was here that I first became inspired to start my own dads group, which would eventually become thePhilly Dads Group founded at the next year’s convention.Being around your peers in any field will give you that sense of self worth. You see that you aren’t the only one dealing with a kid who won’t eat or how your teenage daughter won’t talk to you. I never laughed so much in my life and its end, I cried. In fact, I always do cry at the end even though I know it is coming. I didn’t want this feeling of acceptance to end. I found my people all in one place, no longer scattered but uniformly united by fatherhood.I was inspired after the convention to really pursue my blog and after a year of participating in my first convention, I became the blog editor for their website. All of the guys in the organization are volunteers, working towards the betterment and acceptance of stay at home dads everywhere.  I immediately was dedicated to doing whatever was necessary to make sure I went back the following year to Denver.

These guys became my friends online and in real life. I just felt comfortable around them and I could be myself. I honestly can’t wait for this year’s convention, which is again in Denver. Last year I even went to Dad 2.0 as a representative of the network.The men of the NAHDN were there to help when I needed it most and they lifted me higher than I could have imagined. The shared moments with them socially and the sessions on parenting where just what I needed and when I went back home my wife saw a change in me.  I was dedicated and rejuvenated ready to be back with my kids and be the best dad I could be.Not everyone has the means to make it there which is why there is a scholarship fund. You can apply or have someone nominate you to help you get there. Some men are just not joiners or they question what it would really do for them. For them I say, take a chance. You never know where it will lead. The National At Home Dad Network saved me, and it can save you too.

Chris Bernholdt was an art educator for ten years and has been a stay at home dad since 2008 when he first started writing his blog called DadNCharge. His focus is to empower dads with the knowledge and creativity it takes to raise children.He is the blog editor for the National At Home Dad Network and his writing has appeared on The Huffington Post, The Good Men Project, CNN iReport, and the Life of Dad website as well as TV appearances on The Today Show, Good Morning America, and Fox and Friends. He is also the co-founder of Philly Dads Group a social group for dads. He lives in a suburb of Philadelphia with his three kids and wife, Susie.