Stay at Home Dads like myself are sick of being called babysitters.

We are tired of the stink eyes at the park.

We are frustrated with this belief that a man can’t be affectionate towards his kids.

We are fed up with people who think dads who stay at home are babysitters and not primary caregivers like women.

And just FYI, being called a babysitter AND Mr. Mom just might make us lose it.

Let me tell you if you are one of those who say “man up” that this is exactly what we are doing. Fathers everywhere are turning the 1950’s perception  of what it means to be a dad on its head.

It started with great dads like Charlie Capen’s dad who gave up his career in radio to stay at home with his son and has progressed to a new breed of men who are staying home with the kids. I get teary eyed when I see that Orbit commercial and for the love of God, NEVER play Steven Curtis Chapman’s Cinderella with me around unless  you want me to turn into a blubbering idiot. I am not good with power tools and I don’t know much about cars. It doesn’t mean I am less of a man.  As a teacher, my skill set has always been taking care of kids. That’s what I am good at and many guys are just like me, doing anything for their kids  including staying at home with them.

Remember those class reports where you had to present a riveting topic that you knew nothing about but decided that taking an excerpt from The World Book Encyclopedia word for word would be a good idea? This was not ideal especially when you had to read it to the class using the monotonous Ferris Bueller voice and you would realize that you had no idea what your were reporting on because you never actually looked into it.

Often stay at home dads are discounted and miscounted as we have seen articles like Jordan Weissman of The Atlantic not buying into “The Overhyped Rise of The Stay At Home Dad,” but the truth of the matter is that at home dads are not accurately counted therefore the numbers can never be accurate.

Chris Routly of The Daddy Doctrines lays the specifics out on why the U.S. Census just doesn’t give men who stay at home the recognition we deserve. Believe it or not, men seek out other men to have the very same socialization that women have. Sure, there are more opportunities for women as traditionally this has been their role and it is also true that we aren’t exactly talking about all the same things. But, with roles changing and more men staying at home, despite what the numbers say, at home dads are taking more active roles in creating communities of like minded dads whose primary concern in life is to provide for their children in the best way they can, by loving them in every way they can.

One example of men building a strong community is the National At Home Dad Network and their annual convention. This year the convention is meeting in Denver, Colorado where participants from around the country will meet face to face to learn how they can be better fathers and build lasting friendships with other dads. The convention features speakers and breakout sessions where participants can choose what they want to learn more about and receive support from other dads who are dealing with similar issues. There is a wealth of knowledge among this group that surpasses any book you can read. My first convention was a year ago and was a revitalizing experience that I will continue to participate in. In a little over a week I get to go again and cannot wait.

Stay at home dads, work from home dads, and working dads have sought each other out online and have created Facebook groups so that they can share their experiences, vent, or ask questions. Dad Bloggers from all over the world regularly converse about everything under the sun and make connections with brands, other parents and write about topics we all have to deal with through fatherhood. While seeing other dads in person is more ideal, it is great to know that if I have an issue or just need to “talk” to someone that there is support if you search for it.

Another example of fathers building relationships with other dads is the rise of the community dads groups. Lance Somerfeld and Matt Schneider have built the flagship group in the NYC Dads Group. Following suit here in Philly, me and Jeff Bogle of Out With the Kids, have launched the Philly Dads Group. We aim to give our members an opportunity to socialize, learn, and support each other as we navigate parenthood and spend quality time with our children. Other dads and bloggers across the country have launched similar groups in L.A., Chicago, and Boston and we are forever growing. You can find these groups on Meetup, and more in our Groups section here. 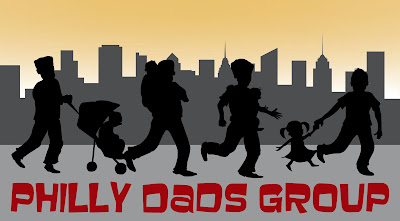 Despite what you might read about the rise of stay at home dads or not or buy into dads becoming more involved, dads everywhere are coming together and redefining the roles that men once held. We are changing what it means to be involved fathers in our children’s lives and if given the chance to be with them during the time that they most need it, we are taking it and not looking back. We know that time is fleeting and that one day the clock will strike midnight and they will be gone and I for one don’t want to miss even one moment. I want my kids to look back on our time together and know without a doubt that I will be there for them through anything.

How is that for being a man?

Chris Bernholdt was an art educator for ten years and has been a stay at home dad since 2008 when he first started writing his blog called DadNCharge. His focus is to empower dads with the knowledge and creativity it takes to raise children.He is the blog editor for the National At Home Dad Network and his writing has appeared on The Huffington Post, The Good Men Project, CNN iReport, and the Life of Dad website as well as TV appearances on The Today Show, Good Morning America, and Fox and Friends. He is also the co-founder of Philly Dads Group a social group for dads. He lives in a suburb of Philadelphia with his three kids and wife, Susie.